Energy transition and resilience in the Collines district

BeninEnergy transition and resilience in the Collines district

This project to develop local economic sectors based on biomass energy in the Collines region of Benin is part of the CEMAATERR program, which aims to help reduce the carbon footprint and improve resilience to climate change in rural areas and secondary cities in Asia, West Africa and the Mediterranean.

Benin is one of the 49 Least Developed Countries in the world with a very low Human Development Index. Its rapidly growing population is largely dependent on wood to meet its energy needs, with 93% of its consumption coming from natural forests.

This is the case in the Collines district, a predominantly rural territory located in the center of Benin, in a tropical climate zone. It includes 6 towns, whose actions are coordinated by the Groupement intercommunal des Collines (GIC). Its forest basin is an important resource for the territory and largely supplies urban areas with firewood. 2,668 tons are produced annually in the Collines, which is still partly uncontrolled.

In addition, the equipment used for various types of cooking is still mostly traditional, not very energy efficient and gives off significant smoke, which is harmful to the health of users, mainly women and children. Rationalizing the use of biomass energy is therefore a major environmental, economic and social challenge in the Collines district.

The project is based on a collaboration between Geres and GIC since 2014 to provide a concerted and sustainable response to the energy and climate challenges of this area. 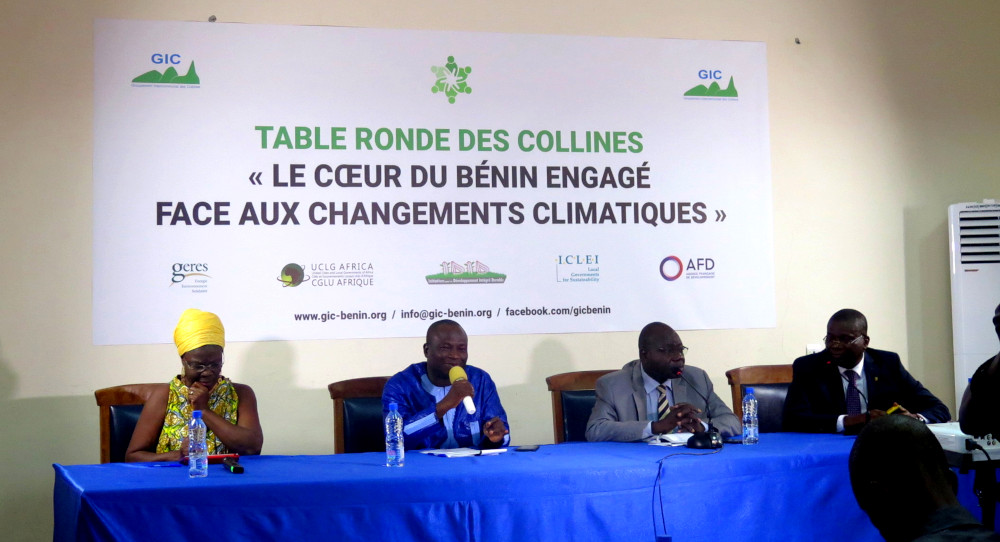 The Collines district is a forerunner in Benin in the local institutional structuring of the territory. The Groupement Intercommunal (GIC), which brings together the 6 towns of the district, led the development between 2011 and 2014 of a concerted and prospective territorial project entitled “Collines 2040”.

The assessment of the climate compatibility of this strategy showed the need to be part of an energy transition dynamic and to ensure that all development projects are resilient to climate change.

The GIC then received technical support from the NGOs GERES and IDID, with the support of FFEM and AFD, to deploy a territorial energy-climate approach consistent with national policies on climate change mitigation and adaptation as well as access to energy.

The first phase of the CEMAATERR project (2017-2020) thus focused on capacity building for municipalities and the establishment of a support fund for local climate change adaptation and mitigation initiatives (FAIAA-CC) aimed at supporting actions to restore degraded land and reforestation by local associations. An international roundtable brought together a hundred participants in 2018 to discuss mobilizing resources to implement the district’s commitment charter for low-carbon and climate-resilient development.

Today, the second phase of the project aims to rationalize the use of biomass energy, which represents a major environmental issue but also an economic and social one in the Collines district.

It is built around two complementary axes:

This financial institution forms the core of the French development aid system for poor countries. Its mission: to take part in funding development by helping the private or public sector and local not-for-profit networks to implement economic and social projects on five continents and in the French overseas territories.